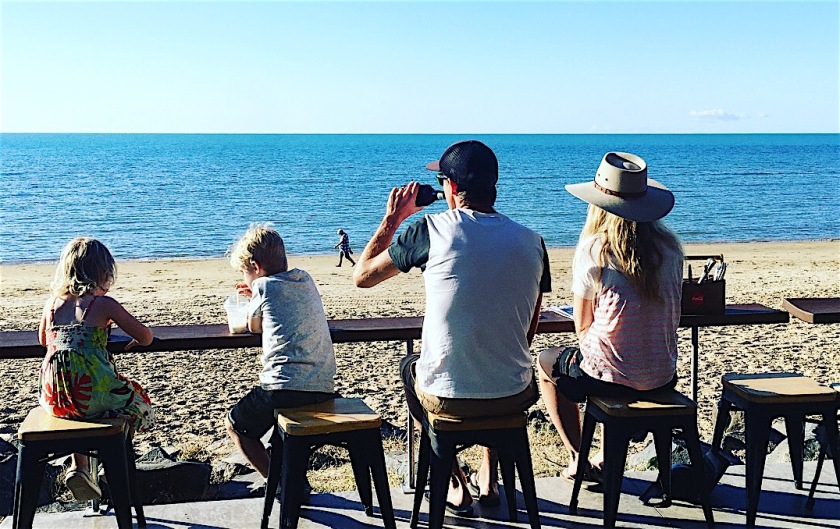 He comes sprinting back from the jumping pillow, white stackhat still strapped beneath his chin, eyes blue puddles of alarm.

Ok, calm down, I say to our seven-year-old trooper. What happened? And he motors through a reply that comes out as a paragraph of words mashed into one breathless line.

They were jumping. They stopped. They decided to come back to the caravan. He wanted to go one way. She wanted to go the other. Before he knew it, she was gone.

I instruct him to stay at the caravan and wait until Daddy returns from the shower. Tell him I have my phone, I say as I begin jogging away. Away through the village of vans stacked side by side like bags of flour on a supermarket shelf.

Why didn’t I get one of those identification wristbands for strong-willed children like most thinking mothers do? Why didn’t I simply write my phone number on her arm? Or tattoo it. Joke. Why did I trust her in the care of her brother?

I don’t get very far before I spot her, both her little hands clasped by two lady campers, one on each side, cooing calming noises at her as they walk her to reception. I’m running now.

All up, she’d been ‘lost’ for no longer than 10 minutes, but it was a wake-up call for me in this rather alternative lifestyle we’ve embraced for a season. This season that has turned on its head all the normal boundaries we have in place. Things that are inconceivable at home aren’t blinked at here. And so I muddle along, trying to figure out what’s safe and healthy and acceptable in this nomadic context.

I’ve been writing my phone number on Adelaide’s arm, and Roman can now rattle it off by heart. We’ve had another stranger danger talk. Next day, the grey nomads were handing out lollies. What can you do?

Jokes aside, we are having a blast! Before I list some significant highlights I will qualify this “having a blast” statement . . . because Team van Ryn is certainly far from perfect, and spending so much time in sardine-can proximity brings out the very best *cough* in all of us. And while I feel anxiety prickle the hairs of my neck thinking of those moments, they have been weighty reminders to bring us to God’s feet: to commit our time, our travels, our conversations, our health, our every interaction to him. And he is so faithful. Such a loving Father. I know he desires that this time strengthens our family in solidarity and gives us a memory we will cherish forever.

So here’s the highlights reel from the last coupl’a weeks:

The whales in Hervey Bay. Oh. My. Goodness. When we paid the cash for a half-day cruise, I had no idea just how GOOD it would be. We saw a few whales from afar, cruising the waves, and that was nice. But when two humpbacks took an interest in the boat and nosed up to its side, I was a kid again. There was this old guy standing silently beside me, filming the whales as they lay on the surface splashing their fins at us, and I feel a bit bad because he’s going to get home and find that some babbling woman was giving a running, high-pitched commentary… “Oh-my-goodness-they’re-so-close-wow-I-can’t-believe-this-look-oh-look-how-amazing-wow-wow-wow…”
Cringe!
Those barnacled beasts of the deep were like big puppy dogs, playing with us, inquisitive to our movements, diving deep and then pushing their great noses out of the water in a manoeuvre I’m told is called ‘spy hopping’. I could have reached out my hand and scratched their bellies, they were that close. Amazing.

Hearing Roman talking about the whales. Phill was on shower duty with Romo, who is seven, and he replayed the conversation back to me later.
“You know the whales today daddy, it doesn’t seem real . . . It feels like a dream . . . It was so amazing!” Phill went on to teach him the meaning of the word, ‘surreal’. English class: tick!

Surfing lesson at Agnes Water. This is so unlike me, to have a go at a water sport. I reckon I’m pretty adventurous, but I’ve never been much of a water baby. When the fambam’s splashing around in the surf, I’m lying on the beach with a book. So on hubby’s encouragement, I had a go. I mean, $25 for a 3.5hr surf lesson – would’ve been silly not to! And it was super fun. The waves were tiny, which suited me fine. And I stood up first go, and second, and third – basically, I did good until my muscles started to protest. Best bit: the kids now think I’m a surfer! Haha! They look at waves and ask if I’m going surfing today!

Family Feud night at a Mackay caravan park. We haven’t had opportunities to mingle with people as much as we would like. The grey nomads are super friendly, but they tend to stick to their gangs and there haven’t been that many families on the road. The young couples from Europe canoodle in their rent-a-vans. So we thought we’d put ourselves out there and attend the pizza and family feud night. There we were in the camp kitchen, packed tight with about 60 grey nomads. We were easily the youngest, but that didn’t matter. Sorted into our teams, Roman named us The Emu Busters and at half-time we were in first place. As more wine was downed, the laughter grew louder (and I tucked the kids to bed with bellies full of lollies), our team was beaten by just three points. The next day, we were greeted with many a respectful nod.

Normal. I know it sounds a bit ho-hum, but when every day brings new places and new experiences, there is comfort in normal. And so I have been able to draw enjoyment afresh from basic things, like sitting down with the kids and drawing, cooking nutritious veggie-laden meals, snuggling together in bed each morning and holding hands as we walk down the street.