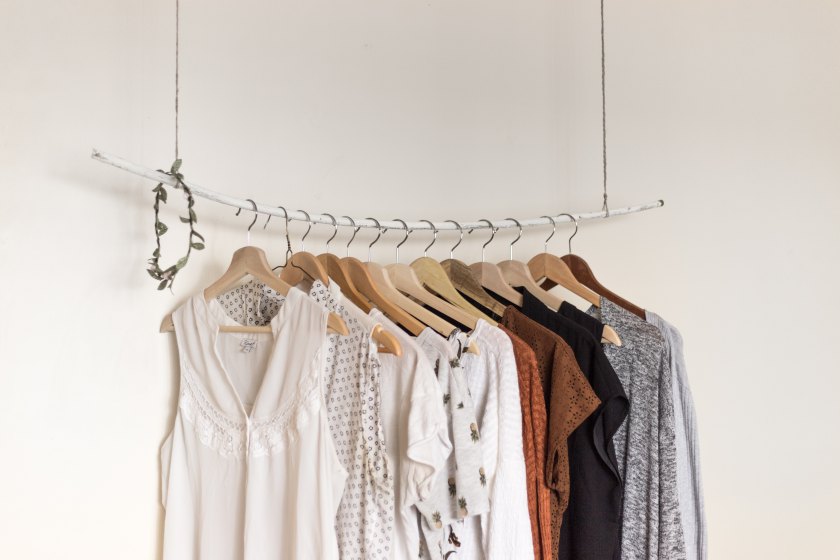 It’s been more than nine months since I started this no-new-clothes-for-a-year New Year’s resolution. Sounds like an AA declaration and, in many ways, I think it’s a good comparison.

Fashion binging is a nasty habit that I’ve kicked.

And what a fitting time to be telling you what’s been born from this experiment. Nine months (closer to 10 months actually) has been the gestation time for delivering a me that no longer identifies as a consumer. I still buy stuff. Too much stuff. But not to keep up, to feel good or for something to occupy idle mind and hands.

I consume out of a measured need or desire.

The pangs of, “I want!” still clamour but there is a new inner voice that counters, “Do you need it?” “Will it make you feel better?” “Look at your already-bulging wardrobe!”

When I have a spare Saturday afternoon (I know, as ludicrous as it sounds, it happens every so often), my mind doesn’t dart greedily to time rifling through clothes racks for that fashion item that will make me more desirable, more beautiful, more noticeable.

In fact, I’ve noticed a shift entirely in the way I view money. Recently I had the opportunity to spend a few hundos on myself. Splurge. Get something nice.

I couldn’t! Couldn’t bring myself to spend so much on something as frivolous as a straightening iron.

Disclaimer: I don’t think that would have been ‘wrong’. And I probably need to also be able to accept favour and gifts as God gives them. But in this particular space and season, I’m seeing the weight of my choices and the way a consumer-oriented life can poison.

I’ve not abstained entirely. I went to a clothes market recently and spent $90. Last year, I wouldn’t have blinked spending that on a (cheap!) pair of jeans. This day, that same amount bought me a leather jacket (leather, not pleather!), dress pants, a Seed jumper, a Zara T, a woollen throw rug – AND a pair of as-new Ziggy jeans. All of it re-loved, recycled and entirely ‘fashionable’ (whatever that means!).

A recent discovery that has its roots in this challenge is the way I have been exposed to less images of cellulite-free women in bitty clothing. I’m not in the shops. I’m not shopping at online stores. I’m not flicking through catalogues. I’m not in those places anymore – those places that have been known to have the effect of shaming my own body with its excess curves and blemishes.

Because new research from the University of NSW and Macquarie University has confirmed a link between body image and exposure to photos of human goddesses (you know the kind; those burnished beauties with no body fat who would look good in a potato sack). We know this, right? But the research specifically looked at photo-sharing social media platforms like Instagram, surveying 276 Australian and American women aged 18-25 years. It found that spending as little as 30 minutes a day scrolling, scrolling, scrolling, is enough to prompt a woman to self-objectify, to fixate on her appearance and weight, and to value her body for the way it looks rather than its health and physical functions.

It confirms what many of us know, deep down. And, like my no-new-clothes-for-a-year challenge, it identifies the poison that goes by the name of Fashion. It also goes by the name of Fitspiration (looking at fit people’s bodies under the guise of inspiring yourself to reach fitness goals) and celeb stalking (following hot celebrities under the guise of keeping up with their news). Ouch. I know it’s a pretty widespread activity, this ‘following’ of pretty peeps. But research says it’s not so healthy. And so does my gut when I indulge in that innate female comparison game.

Anyway, it’s something I’m conscious of cutting out.

I’ve bumped into quite a few of you who have taken up the no-new-clothes-for-a-year challenge this year. YAY! It’s so encouraging to see you trying it out. I’d love to hear your own revelations. Because we’re not necessarily doing it for the same reasons – and that’s more than fine – but we ARE growing as we do it.

Cheering you on!
Claire.
x

P.S. A friend put me onto this podcast called Wardrobe Crisis by Clare Press. If you’re serious about sustainable fashion, you will love, love, love it. And I have to admit I’m a little bit starry-eyed about all of the mags she’s had bylines in!