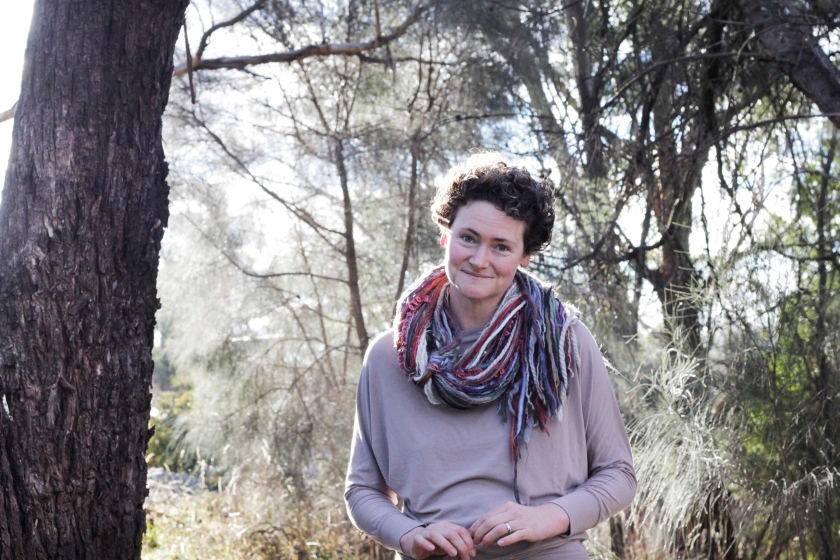 This article is part of the #flamfaces series.
Here, Melissa Lubke of Launceston shares a snippet of her story.

I was 11 weeks pregnant with our third child when my husband died.

I drove to the church barbecue down the road, while Andrew rode his motorbike shortly after. Half an hour passed, mingling with people, and a friend said, “Where’s Andrew?”

Then it clicked.
Where’s Andrew?
What are all those sirens?

Andrew used to joke that I jump to conclusions, but this time I was right, honey.

I went to see.
It was less than a kilometre away and they were turning cars around.
I kept going.
I just knew.
I kept driving closer to the police car and I wound my window down and said, “Is it a motorbike?”

And she said yes.

I’d seen people come off motorbikes on TV and they were fine. So at that stage I imagined it would mean a lot of bed-ridden rehabilitation.

I rang our friends and asked them to pray before following him to hospital in another ambulance.

That night, I went to stay with my friend Bronwyn. We got the sofa bed out and were just lying there together.

I was going through in my head what I was praying for. What am I praying for? This man is a jack-of-all trades and he just loves to provide. He is humble and gentle and kind. What’s this guy going to do? We’re on a farm and he’s not going to be able to do anything.

We tried to sleep. I said to Bronwyn, “You know how the Bible says cast your burdens onto Jesus who cares for you? How do you do that and not pick them up again?”

She said, “Sounds like you need to speak it out to Him.”

So I physically handed it over in the dark, lying in bed. Handed over whatever it was that I couldn’t put words to. And I started to cry.

I could see a vision of Jesus but he was turning around so all I could see was his back, like he didn’t want anything to do with me.

It was slow motion but split-second, and then I realised he’d actually taken it, my burden, and put it behind him so that I couldn’t get to it.
And at that moment I saw a bright light that couldn’t hurt your eyes.
He was large.
He was small.
He was far away.
He was close.
I can’t really explain it, but I knew I couldn’t get past that. It was like the Holy of Holies, a sacred place where I could not pick up those burdens anymore.

At that moment I thought, it’s yours. I don’t know what’s to come, but it’s yours. I’m yours. In my mind’s eye, I just fell at his feet. I just wanted to kiss his feet and say you’re my father, my husband, my everything now.

It wouldn’t have been long and we got a phone call saying come in. They were working on him all night. He was brain dead at that stage. I would not be surprised if that was the moment he went to the Lord.

I got up and got dressed. I was going to say goodbye to him.

I didn’t know what to expect. I didn’t want my last memory of him to be messy. A lot of the damage was to his torso, so they covered that up. They put warm packs on him so he was warm and I was almost like, ‘We can bring this man back to life!’

It was beautiful. He only had this little sore above his eye. And I kissed him and kissed him. I imagine it was how it would’ve been when Mary kissed Jesus’ feet, just putting my face all over his hair, to just have him all over me, just holding his hand.

On the night of Andrew’s death our church family and friends gathered in a circle sharing grief, memories, love, support and words from the Lord himself:

“Religion that God our Father accepts as pure and faultless is this: to look after orphans and widows in their distress…”
James 1:27

Only my parents knew we were pregnant. We chose to protect ourselves from more disappointment after two previous miscarriages. So the night ended with the bitter-sweet announcement of Andrew’s longed for, precious, new baby growing inside of me. A symbol of hope and a challenge to us all. This was Christ’s church at work. Andrew was dear to many and it has shaped who we are as a congregation.

I think, the combination of these people, the vision of Jesus and the verse, “In all your ways acknowledge him…” have completely changed my faith. I’ve got a story now. This is my life. People might go, oh, that poor girl, she’s just pregnant and she has two children and one has special needs and she’s left on her own… but I’ve got a beautiful testimony now and it cuts straight through the crap, straight to Jesus.

If I die tomorrow, I’ll be fine. I can trust that the children will be fine too. It’ll be different, but God never changes.

“Trust in the Lord with all your heart and lean not on your own understanding;
in all your ways submit to him and he will make your paths straight.”
Proverbs 5:6

Digging. Exploring. Playing.
Spending some time with Eleanor this weekend, I like her very much!
Clocking out for a few days of writing retreat here ⛰ See you later ☺️
How gorgeous is this card?!
I’ve started a new blog... writing about writing. In my first post, I write about feeling my way forward. Starting. Here’s a snippet. You can read the full post via the link in my bio...
I have a new piece of art: this sweet little oil painting on the right titled Head & Shoulders Above the Rest, by @fionaverdouw_art 😄🙌🏼 I LOVE it! Now I get to admire it each day I sit down to work 💛 Speaking of which... I also have a new website, built it myself in fact. Link is in my bio for anyone interested in my writing forays x x x Happy Monday!
#frostymorning #830am #soccermum
She’s seven. Just like that! HBD sweet Adelaide 💙
Enjoying these two reads set in the Tasmanian wilds ⛰