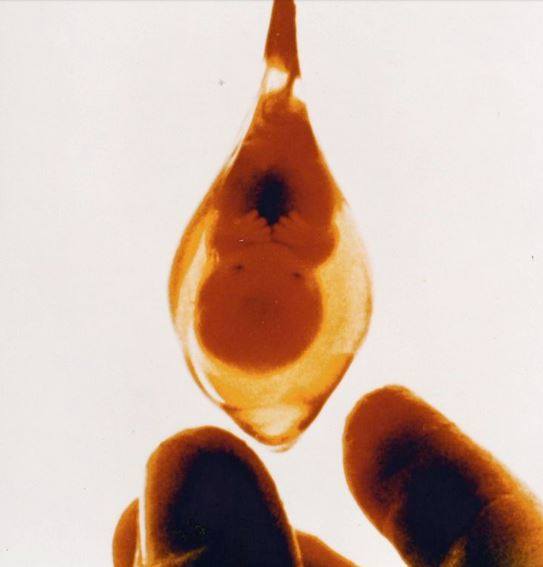 A golden droplet the size of a mandarin segment encases the undeniably human embryo. Head, eyes, arms and fingers are evident in exquisite detail. The fingers of the doctor or nurse hover below, giving scale to the dot of life they are about to grasp.

The photo was taken during surgery for a ruptured ectopic pregnancy at the University of Minnesota in 1972. The doctor who administered the anaesthetic beheld, “what I believe was the smallest living human ever seen.”

This is what he described:

“The embryo sac was intact and transparent. Within the sac was a tiny human male swimming extremely vigorously in the amniotic fluid, while attached to the wall by the umbilical cord.

The tiny human was perfectly developed, with long, tapering fingers, feet and toes. It was transparent, as regards the skin, and the delicate arteries and veins were prominent to the ends of the fingers. The baby was extremely alive and did not look at all like the photos and drawings of ‘embryos’, which I have seen. When the sac was opened, the tiny human immediately lost its life and took on the appearance of what is accepted as the appearance of an embryo at this stage, blunt extremities, etc.” (Paul E. Rockwell, M.D.)

Twice I have experienced loss, knowing I would not meet my babies who died before 12 weeks gestation. It’s a lonely kind of grief when half the population, it seems, does not acknowledge the life of one so small.

Yet, that culture is changing.

The Tasmanian government announced a few weeks back that women who lose a baby early in their pregnancy will soon receive a Recognition of Loss certificate. Currently, the loss of a child in utero is only recognised after 20 weeks when it is categorised as a stillbirth.

‘Tis a beautiful gesture. The way it should be.

When I again look at that image of the two-month-old baby boy, golden and safe in his embryonic sac, I wonder why this photo and testimony seems so new and enlightening when in fact it is more than four decades old.

Makes me wonder, is the medical fraternity holding out on us? Surely encounters like these still happen. With advancements in medicine and technology, even more so.

Why don’t we hear about it?

Perhaps life is a dangerous topic…

I watched the film Heaven is for Real the other night, after the kids were tucked up in bed. Just me and a tissue box. I’d read the book so I knew what I was in for.

It’s based on the true story of Colton Burpo who, at the age of three, nearly dies and later recounts his experience of entering heaven and hanging out with Jesus.

Up to that point, the story is easily put down to childish imagination or the effects of painkillers.

But Colton goes on to describe an encounter with his “other sister” in heaven, the sister he didn’t know he had. His mum had a miscarriage at eight weeks, but they chose never to tell Colton as he was so young at the time. After his near-death experience, he told his parents that he met her, played with her.

“Why didn’t you name her?” he asked them. Through tears, Colton’s mum explains that she never knew her baby was a girl.

Life is valuable beyond measure. Its inherent significance is felt in the teeny-tiny through to the earth-shattering brushes with God.

You’ve felt that; I know you have.

It’s just a matter of opening your eyes to the evidence.

First published in The Examiner Newspaper for Keeping the Faith column on Monday June 15, 2015.