PROJECT ESTHER made it to the papers last week for its plans to organise a ‘March for the Babies’ in November in response to the passing of Tasmania’s Reproductive Health (Access to Terminations) Act.  This fresh-faced organisation may be unknown to you, so I made contact with its founders for a quick Q&A.  Read on for some background on Project Esther, an admirable group led by a passionate pair making a stand for the unborn.

What is Project Esther?
We are a small, non-profit, non-denominational, pro-life organisation that aims to deliver pro-life education to the Tasmanian public through events, programs and initiatives. 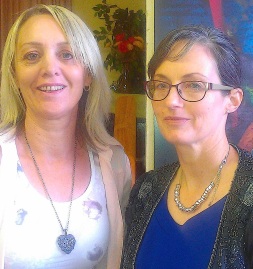 Gaye (left) and Kathy, directors and founders of Project Esther.

Gaye is a mother of seven and grandmother to four. She has a BA in Social Science/Counselling and works as a Family Support Worker four days a week with the local neighbourhood centre. In her “spare” time she loves to read and occasionally dabble in writing.

Kathy is mother to 13 and grandmother to five.  She home-educates and runs a small online business. Trying to end abortion is her passion.

Ultimately Kathy and Gaye have a similar goal in life – first and foremost to serve and glorify God and in doing so to leave a legacy of purpose;  to make their lives about something bigger that will live on after they have gone and leave a positive impact on the world.

Why was Project Esther started?
Project Esther was formed in response to the passing of the Reproductive Health Act in November 2013.

What’s your vision?
To be an organisation that provides, promotes and encourages life-affirming action in Tasmania, ultimately seeing the Tasmanian State Government pass a Life at Conception Bill that will override the current Reproductive Health Act.

What’s in the name?

Gosh, there is so much in our name that I couldn’t possibly fit it all into a couple of sentences!  Basically, I woke up one morning with “Esther’s Choice” in my thoughts.  I ran it by Kathy and did a quick study of Esther and found that so many of her characteristics, traits and accomplishments resonated with ours.  Esther chose to yield her life to God’s purposes and God used her in a mighty way—to deliver the whole Jewish population that had been sentenced to death.  Similarly, we believe that Project Esther is inspired by God and that He is using us to accomplish His will to change hearts and save HIS babies.  Our ultimate goal is like that of Esther’s who wrote an edict that was entered in official records (Esther 9:29, 32).  We want to see, and are believing for, the writing of a new law that will override the current law.

What’s on the Project Esther agenda this year?
So far this year we have hosted two events; one in January with Graham and Liz Preston and on Sunday a Youth for Life (YFL) event where members from YFL Melbourne came to plant seeds for a Tasmanian YFL.  This was a great success and we are hoping for big things from our youth here in Tasmania.

Our ongoing project is to run street information sessions which will be held every second week starting February 24 at various locations around Tasmania.  Our biggest event for the year will be a ‘March for the Babies’ in Tasmania.  This march is to honour all of the babies who have lost their lives to abortion in Tasmania and to oppose the current legislation and call for a bill to be passed recognising life from conception.

We embrace partnership and collaboration and would love to see many Tasmanian churches and pro-life organisations involved in the planning and running of this march.  However, currently it is just Project Esther and we are in the early stages of planning.  Our agenda at this stage is to hold a fundraising event on the Friday evening, the march on the Saturday afternoon and a family BBQ to follow.

Our next meeting for the planning of the March for the Babies is on March 17 at 6.30pm and we would welcome anyone who wants to get involved.

You featured in an article for The Examiner last week – anything you’d like to add to what was reported?

Project Esther was ecstatic last week at being given the opportunity to do an interview with Calla Wahlquist from The Examiner.  We were so grateful to be featured at this early stage of our group’s formation.

Some of what we shared for the Examiner’s article didn’t reach print.  Here’s the important points:

How can people support your work?
There are many ways to support Project Esther: for our Christian supporters we ask for prayer – pray for us, pray to end abortion in Tasmania, pray for abortionists, pray for women and their babies, and pray to know how God wants you to serve Him in pro-life work.  We are also seeking both physical and financial help.  People might like to follow us on Facebook or drop in and say “hi” when we’re in their area doing street information sessions, and attend our events. If anyone feels inspired to make a bigger commitment to changing the face of the pro-life movement in Tasmania, then they can join Project Esther and help us with our street information sessions and with organising events. We are currently seeking helpers for the March in November.