Da was a teenager when his father died of illness as a result of the war. His dad fought in the war and came back altered by the war, like so many who served our country. So it was that my grandfather – Da as he is affectionately known in my family – became a father himself without a strong father figure to draw on.

Isn’t that the story of so many? For one reason or another, the “absent father” is a very real non-character in the modern Australia we know.

And yet, I feel certain that Da had many fathers.

Father in the crudest definition is about biology, of sperm ownership and DNA. But in truth, a father is more about meaning and influence, of legacy and love.

Yesterday we celebrated fathers and, by extension, grandfathers, step-fathers, great-grandfathers, fathers-in-law, forefathers, foster-fathers, adoptive-fathers and God-fathers. To this we should add what I will call ‘gap-fathers’ – those beloved men who stand in the gap when there’s no dad around, for whatever reason.

God is everyone’s ‘gap-father’.  He is a good dad who takes our burdens upon his broad shoulders, sits us on his knee and hears our hurts, whispers gentle guidance, builds us up with words of acceptance, support and value, and then wraps us in his boundless love.

“A father to the fatherless, a defender of widows, is God in his holy dwelling. God sets the lonely in families, he leads out the prisoners with singing; but the rebellious live in a sun-scorched land,” Psalm 68:5-6 reads.

My Da met this gap-father God I talk about at a Billy Graham crusade in the ‘50s.  And I see the fruit of that decision, the influence of Da’s heavenly Father, stamped all over his life. 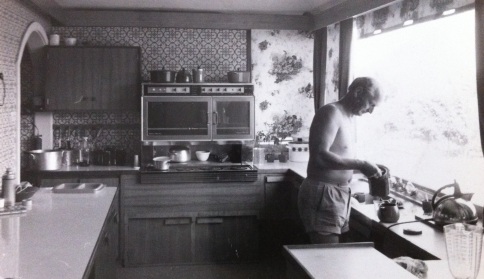 I love this photo. I found it when sifting through one of my grandmother’s many scrapbooks. It shows Da a few decades back, making a cup of tea on what must have been a scorching hot day!

Da has always given freely of his time and resources to those in need, his faith is stoic – a constant in the ups and downs of life, he just celebrated 60 years of marriage, and he has a small army of friends who have no bad word to speak of him.  What I like best though is the influence he’s had on my own dad.

My dad is generous of his time, talents and resources, he has a steadfast faith, and he just celebrated 31 years of marriage.

I’m proud of my Da and my Dad, yes.  But I’m also very aware that they have not achieved such legacies without the influence of their Heavenly Father.   The dad who stands in the gap when mere mortal fathers inevitably come up short.

Without further ado, I would like to take this opportunity to salute all the fathers, grandfathers, step-fathers, great-grandfathers, fathers-in-law, forefathers, foster-fathers, adoptive-fathers, God-fathers and gap-fathers out there.   And most of all, I honour my Heavenly Father.

As printed in The Examiner for Keeping the Faith column on Monday September 2, 2013.