“I seem to have a gift with donkeys, I can read them no matter how wild they are.”

When Gayelene Harrower admitted her donkey-whispering talent, I may have choked back a giggle. But as our conversation continued I became interested and then intrigued at her marvelous breadth of knowledge regarding the humble, big-eared animal, and her donkey pursuits.

The wife of Tasmanian Anglican Bishop John Harrower has four donkeys which form the onlyworking herd of donkeys in Tasmania, giving rides and pulling carts at 30 church and community events each year. Gayelene is also an honorary life member, and the Tasmanian representative, of the Good Samaritan Donkey Sanctuary which cares for more than 130 donkeys. 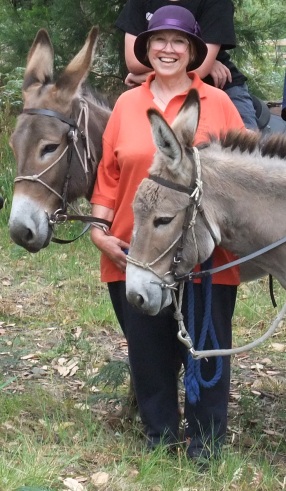 Gayelene Harrower with two of her beloved donkeys.

The animal-lover has rescued donkeys from abusive homes – one that was tortured and beaten until it was so wild, it took Gayelene three months before she could touch him and get close to him.

She was living in metropolitan Melbourne when she first “felt led” to buy a donkey. Most of us would shake off such an inclination, giving some kind of excuse like not having had enough sleep lately. Gayelene recognised God’s still, small voice. She bought a donkey.

Of all the beautiful creatures to grace our planet, why a donkey?

She probably asked herself the same question all those years ago, but today she replies without a moment’s hesitation.

“It’s a humble creature,” she begins.
“I think it’s so significant that Jesus came riding a donkey and not an Arab charger – it shows his servanthood.”

Yesterday was Palm Sunday, the day we remember when Jesus arrived in Jerusalem as a king, people celebrating his arrival, spreading branches and the cloaks off their backs on the ground in front of him. It was a sunny, joyous day that belied the dark time of Jesus’ death that would follow just five days later.

As Gayelene pointed out, Jesus arrived humbly, not prancing atop some fancy stallion, looking down on the crowds. He came on a donkey – a donkey’s foal in fact, humbly, looking directly into the eyes of the people gathered around him.

Jesus demonstrated humility from the beginning to the end. He dressed simply and lived modestly. Despite the importance of his mission, he made himself a servant so that his message would be heard by all: rich and poor, powerful and lowly. Humility was an important part of Jesus’ example and there is so much we can learn from him on this topic.

“All of you, clothe yourselves with humility toward one another, because, God opposes the proud but shows favour to the humble. Humble yourselves, therefore, under God’s mighty hand, that he may lift you up in due time,” 1 Peter 5:5-6 says.

With Easter just days away, I encourage you to consider the humble heart of this man Jesus, who chose a donkey instead of a stallion, to look into our eyes instead of looking down on us from above.

As printed in The Examiner Newspaper for Keeping the Faith column on Monday March 25, 2013.